What Raw Material can be used to Produce Compressed Biogas (CBG)? 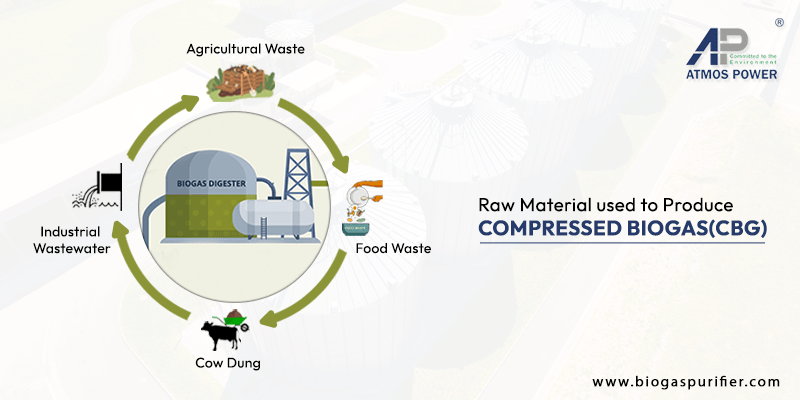 You must be aware of the term biogas. It is a gaseous mixture resulting from the anaerobic digestion of organic source materials. The major components of biogas are methane, carbon dioxide, hydrogen sulphide, and saturated moisture. Earlier, biogas production was limited to farmyard manure in rural areas of India and was used for culinary applications. The recent biogas plants produce tons of biogas from various organic waste streams. So, from where do they get the feedstocks to produce the compressed biogas? Let us help you with the answers below:

This is one of the most easily accessible options, due to its ample availability in the Indian Subcontinent. Rice straw is a significant agricultural waste that contributes greatly to air pollution in northern India, but it can be effectively converted to compressed biogas. Apart from rice straw, some other agricultural materials can be used for biogas production, such as sugar cane, cassava, corn etc. Also, other agricultural residues like cassava rhizome, corn cobs etc, wood and wood residues can be utilised.

Cow dung, also known as cattle manure is another readily available feedstock that can be converted to biogas. Viable compressed Biogas plants can be installed at the locations where bulk manure is generated such as large cow shelters (goshalas), dairy farms, and other clusters, among others.

Another source of feedstock is press mud, which is a waste product from sugar mills in India. It is a rich source of organic material that can be easily turned into compressed biogas. India produces more than 340 MMT of sugar. As a result, roughly 1.3 MMT of press mud is generated annually and it can have an huge contribution in producing compressed biogas.

India generates more than 60 MMT (Million Metric Tons) of Municipal Solid Waste. However, the problem starts with the lack of processing and treatment facilities. MSW can be transformed into biogas, however, the barrier to this transformation is the segregation process. Only after proper segregation of organic and inorganic waste can the potential of generating biogas at the Compressed Biogas Plant be unlocked.

India is renowned for its diverse cuisine across the county. However, we waste a lot of food in an organised value chain, including hotels and restaurants. Some Indian cities are making every effort to collect food waste and process it in specialised facilities in order to maximise its value. Efforts can also go into making BioCNG which can be produced from this food waste.

Whenever possible, all industrial effluent with a high organic content and biogas generation potential should be considered for CBG generation rather than heat and power.

Using these feedstocks, we can generate tons of biogas which is useful in multiple ways, especially considering that the world is facing a gas crisis due to the Russia Ukraine War. The above feedstocks are readily available for majority of the year and they can also be stored safely to allow biogas generation throughout the year at biogas to CNG plant. So, let’s increase the number of Biogas plants in the country and create compressed Biogas from the above feedstocks.