Biogas upgradation has been picking up all over the world based on the advancements in upgradation technology and the requirement for cleaner fuel. Even though there is widespread awareness regarding the benefits of upgraded biogas and landfill gas, there is still not a mass scale dispersion of this technology. One of the main reasons for this low level of awareness is the lack of nomenclature uniformity in this industry. For instance, in India upgraded biogas is referred to as Compressed Biogas, in other Asian countries it is called BioCNG (compressed natural gas), in North America as Renewable Natural Gas (RNG) and in Europe as Renewable Biomethane or Upgraded Biogas. Based on these diverse terms used for the same product, it becomes essential to develop a universal term that would be common amongst all countries in order to allow for a swifter transmission and awareness of this noble solution. The term Biomethane is quite apt as it focuses on the key molecule of the upgraded gas, which is methane. The final step of the Biogas upgradation process is C02 removal using a Carbon Dioxide Scrubber. As the name suggests a Carbon Dioxide (C02) Scrubber helps in the removal of carbon dioxide from the Biogas, which significantly increases the calorific value of the purified gas by concentration its methane content.

Biogas has been generated and consumed in India for close to a century. However, due to lack of technological know-how and financial resources the potential of Biogas has never been harnessed fully. AtmosPower realizes the huge potential that Biogas can play in supporting the country and is thus focusing all its engineering expertise on this sector.

After Designing, Manufacturing & Commissioning more than +85

with flow rates ranging from 20Nm3/Hour - 7000Nm3/Hour, AtmosPower has become the unparalleled leader in Asia for Biogas Upgradation Solutions!

Each biogas project executed by AtmosPower is custom-tailored to the needs and requirements of its clients. In addition, as most of the equipment is manufactured In-House, AtmosPower can make sure that the quality of its equipment is never compromised. Based on the highest quality control measures and dedicated experts with more than 30 years of experience in the Biogas Arena, you can be confident that your plant will be designed to highest industry standards.

AtmosPower’s Upgradation systems are based on the Principal of Minor Pressure Swing Adsorption. Minor pressure implies that the systems operate at 0.7 Bar G pressure, compared to standard

that operate at 6-10 Bar G pressure or higher. The lower pressure offers the advantage of extremely low power consumption, which significantly reduces the operating cost of your system in addition to the lower Capex.

Based on its patented

technology, AtmosPower is one of the few companies worldwide that can guarantee a methane recovery of greater than 99%.

In addition, most of the proprietary adsorbents used as adsorption media, are manufactured at AtmosPower’s dedicated factories to maintain the highest quality standards.

Innovation supported by constant Research and Development is at the heart of AtmosPower’s culture. Equipped with solid Bio-Chemical experience and constant R&D, AtmosPower can offer upgradation solutions for a variety of gases including, but not limited to the following: 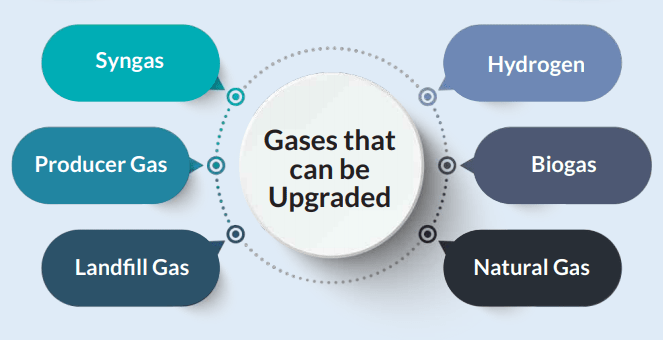 Turnkey Solutions from Raw Gas to End Use 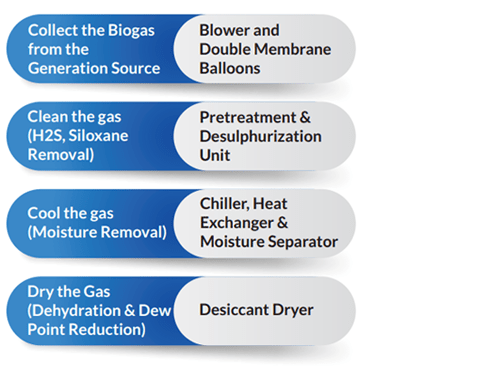 How the process work 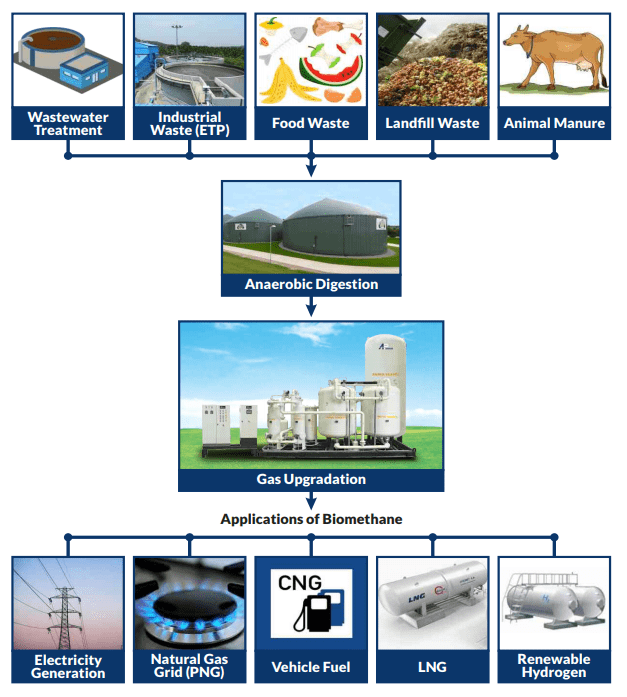