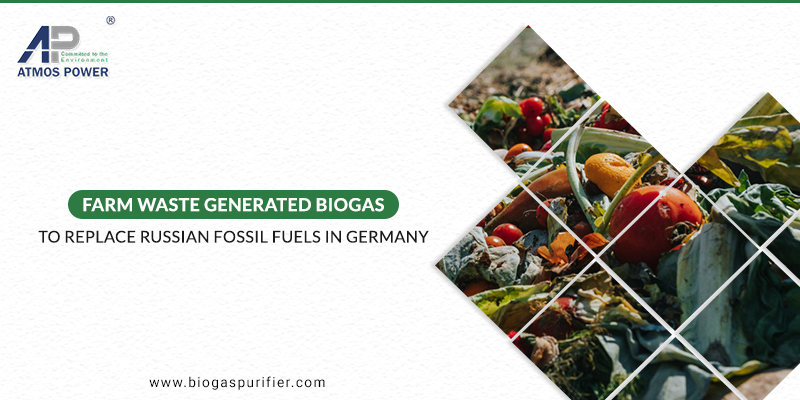 Post the Ukraine war, Germany is looking for alternative energy sources to reduce its dependence on imported Russian oil, coal, and natural gas. In this attempt, Germany would use tones of organic waste such as corn, grass, and manure for biogas generation.

A compressed biogas plant located on Kaim’s property in the west of Berlin is a great example of how serious Germany is about biogas generation to reduce dependence on Russian oil and natural gas. There are 100 dairy cows and three mammoth cylinders at this farm and you’d see tones of organic waste being poured into the receptacles of this plant. Biogas gets generated due to methanisation- a process that is fueled by bacteria and involves the processing of organic matter which is converted into biogas.

At the moment, this small-scale power plant is currently heating 20 houses in Ribbeck village at the moment. Kaim, the owner of the farm is proud to make his vital contribution to energy production to increase self-reliance; however, he feels that the state can make the authorization procedures simpler than they are at the moment. The biogas sector in Germany is expected to grow at an exponential pace in the wake of the Ukraine war. Earlier Germany would import about 55 percent of natural gas and 35 percent of oil from Russia. Besides, half of their coal needs were being fulfilled by coal imports from Russia as well.

Berlin is all poised to go green to reduce its energy reliance on Moscow. Germany has happened to be the European leader in the sector and although biogas just accounts for 1 percent of consumption in the European economy, the future certainly looks bright as Germany aims at increasing its production by 20 percent with immediate effect. This would serve as a replacement of 5 percent Russian gas right away.

It is interesting to know that half of the continent’s methanisers are in Germany and that speaks volumes about Germany’s biogas production & biomethane potential.

The German biogas sector saw a slump at the beginning of 2014 when the government decided to scale down and reduced production in the wake of a complicated system of targeted subsidies.

Germany looks determined to rectify its past mistakes and give the compressed biogas plant industry the necessary boost it needs for revival; however, some experts have a different opinion and the apprehension reflects in some of the statements coming out in the recent past.

Michael Sterner, a renowned researcher at the University of Regensburg chooses to differ and finds it irrational to increase biogas production when the threat of food insecurity looms large due to the Ukraine war.

Ingo Baumstark, another expert and spokesman (Federation of Gas Producers), states that production can take place in a decentralized manner. Besides, the industry is also looking to abandon maize monocultures that are particularly dedicated to biogas production in Germany.

Hope you found the post useful. For more information related to biocng or biogas to bio cng plant, feel free to drop us a line.